This tag is associated with 2 posts

“Schock on our scorecard only got a 44% which is a flunking grade for anybody. Unfortunately Schock is a young guy in his early 30s as is Kinzinger but they are trying to portray themselves as the next generation of Republicans in Illinois.  Awful way to reenergize the GOP.”

Chicago, Illinois – Apparently, Rep. Aaron Schock has a number of superfans in the Illinois Republican Party, among them CBS Chief Correspondent Jay Levine and GOP party chief Pat Brady. Levine gushed like a schoolgirl during his interview with the 30-something congressman Friday. Quivering at the knees, Pat Brady had this to say when questioned about Schock’s future in state politics:

“I think it’s unlimited. I think anything he [Schock] puts his mind to, he can accomplish,” Brady said, who is leading a charge to reduce the role Illinois Republican voters would play in choosing their gubernatorial nominee.

Maybe it’s Schock’s penchant for the color pink that has these party bigwigs getting a collective shiver up their  spines. But Illinois party officials are already mouthing the words, “Governor Schock” for 2014.

However, not everyone is a fan of Schock’s. Tea Party leaders are still furious over Schock’s participation in the defeat of longtime conservative congressman Don Manzullo. A number of Illinois Republicans also worked against Manzullo. But Schock’s biggest opponent may be one he cannot ignore – the conservative super PAC, Club for Growth. The conservative super PAC sat down for a three-part interview with William Kelly to expose Schock’s ultra liberal voting record, his relationship with freshman Rep. Adam Kinzinger and Rep. Eric Cantor, and how the liberal Young Guns PAC is recruiting liberal Republicans to run against conservative candidates.

Here is a preview of the EXCLUSIVE interview – the full article will appear Wednesday morning at Bill Kelly’s Truth Squad at the Washington Times Communities.

KELLY: This guy – Aaron Schock – what can you tell me about him?

CLUB FOR GROWTH: He’s a very liberal Republican. The reason he decided to go with Kinzinger is because they are two peas out of the same pod. Schock on our scorecard only got a 44% which is a flunking grade for anybody. Unfortunately Schock is a young guy in his early 30s as is Kinzinger but they are trying to portray themselves as the next generation of Republicans in Illinois.  Awful way to reenergize the GOP.

With regard to the FEC complaint against him, Schock admitted to his crime in the press. He said he would support Kinzinger against Manzullo and he wanted Cantor’s help so he went to Cantor and said Cantor please give $25,000 to the Campaign for Primary Accountability and by doing that he broke the law. As a lawmaker you cannot solicit for more than $5,000.

CLUB FOR GROWTH Clearly they [Cantor and Schock] are targeting conservatives because they have impeded leadership’s ability to pass large spending bills with liberal Democrats. We saw that with the debt deal last year and earlier this year with the highway bill. We will see it again this year with the farm bill.

KELLY: So GOP leadership was against Manzullo because he opposes redistribution of wealth?

MAUREEN: What do Schock and Kinzinger get out of it?

KELLY: Transalation? They [Schock and Kinzinger] have no core values. They want job security. Benefits. Pensions. They want the goodies. So they are willing to sell out. Andy, was that about right?

Parts two and three of this exclusive interview will be released this week. 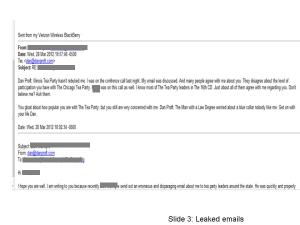 “You gloat about how popular you are with The Tea Party; but you still are very concerned with me. Dan Proft; The Man with a Law Degree worried about a blue collar nobody like me. Get on with your life Dan.”

– Illinois Tea Party organizer who was bullied by Dan Proft

Chicago, IL – WLS radio host and political operative Dan Proft, who is already raising money for his second bid for Illinois governor, isn’t on the greatest terms with Illinois tea party organizers these days, as a series of bullying emails to tea party members emails leaked to Illinois Citizens for Ethics Reform reveal.

Over the last week, a frenzy of angry emails were traded with tea party organizers who generally agreed that Proft, who has a troubling financial relationship with the town of Cicero, would be no longer be invited to speak at tea party events. Proft had been a fixture on the Illinois Tea party speaking circuit since 2010.

“Mr Proft is a turncoat, not in a sense that he is going from Conservative to a Liberal. but he certainly is trying to promote himself as some sort of Tea Party Conservative and then acts like a BIG “R” Republican or worse RINO. Encourage this at our own peril,” said one tea Illinois tea party organizer in his email.

“I had him scheduled to speak-but he was cancelled a couple weeks ago. He didn’t take it well, so much for his next run for office,” said another.

“I say uninvite those who are not with us when it counts. The Summer Soldier and Sunshine Patriot did not create our Declaration and Constitution; Those who decided to hang together did,” said yet another.

In the emails, the Chicago Tea Party was also criticized for having Proft be a featured speaker at its April 16th rally in Chicago and Proft’s relationship with the group was also questioned.

“To those this may concern: Dan Proft will be speaking at The Tax Day Rally in Chicago. I am requesting that each of you send out a press release concerning Dan Proft. We don’t want him speaking for or at Tea Party events. He is using the Tea Party to gain credibility and to further his own political career. Dan Proft has been endorsing candidates who are far from conservative or share any of our Tea Party principles. Also; Contact those who are hosting The Chicago event and tell them to cancel Dan Proft,” said another email.

The current leader of the Chicago Chicago Tea Party is Eric Kohn, who, according to his LinkedIn account, worked as operations manager for Proft’s Urqhardt Media in Cicero. He is also named as the treasurer of Fiscal Accountability PAC, which contributed to Proft-backed candidates this election cycle. It is funded by the Illinois Opportunity Project, which lists Proft as a board member. Illinois Opportunity Project contributed $10,000 to Proft for Governor on March 20, 2012. Source: Illinois State Board of Elections

The level of anger escalated to the point that a conference call with Illinois tea party activists was called by Illinois Tea Party head Denise Cattoni.

Unhinged by all the criticism, the WLS radio host began targeting tea party organizers who sent out the emails criticizing him. With one tea party member, Proft bullied the organizer with a bombardment of harassing emails laced with arrogant and condescending remarks such as, “Learn to read,” and “know you don’t deal in facts; you deal in unfounded attacks and cowardice,” “soft-headed juvenile behavior” and “now try to stay on point.”

From Dan Proft:  I am writing to you because recently XXXXXXX send out an erroneous and

disparaging email about me to tea party leaders around the state. He was quickly and properly rebuked by the Chicago Tea Party among others.  But the most disturbing part of his email wasn’t his ad hominem attacks on me. I am used to such soft-headed juvenile behavior by those with little command of the facts but a lot of free time. The most disturbing part was his call for me to essentially be silenced ostensibly because I supported Adam Kinzinger over Don Manzullo. Of course, thankfully the overwhelming majority of tea party leaders and ILGOP leaders for that matter understand that attempting to silence dissenting views, particularly on the basis of a disagreement over a particular campaign or particular issues, is the province of small minds and small men.”

Feeling harassed by Proft who had been emailing him non-stop over the course of a week, the organizer wrote back to him:

From Tea Party Organizer to Proft: Dan Proft,  Illinois Tea Party hasn’t rebuked me. I was on the

confrence call last night. My email was discussed. And many people agree with me about you. They disagree about the level of participation you have with The Chicago Tea Party. XXXX was on this call as well. I know most of The Tea Party leaders in The 16th CD. Just about all of them agree with me regarding you. Don’t believe me? Ask them. You gloat about how popular you are with The Tea Party; but you still are very concerned with me. Dan Proft; The Man with a Law Degree worried about a blue collar nobody like me. Get on with your life Dan.

Proft, angered by the criticism of his activities, apparently believes that bullying and harassing his critics is the way to silence them. So much for the First Amendment, right Dan Proft?

Proft’s D-list William F. Buckley routine was already wearing thin but no one likes a bully.